There are many excellent books about London’s buses, but this one is unique. In one volume it lists every bus and coach, new and second-hand, bought by London Transport and London Buses from 1946 until privatisation in 1994.

At the start of the period LT was taking delivery of its last wartime buses. At the end, the first of a new generation of low-floor buses were being delivered. In between there were classic types such as the RT and the Routemaster and less successful models like the Merlin and the Fleetline. All are listed, along with unusual and short-lived vehicles including a Neoplan Skyliner, a Renault PR100 and the unusual Dartford Tunnel Thames Trader bicycle buses.

The vehicle lists are supported by informative text giving an overview of the various vehicle types – and there’s even an acknowledgement by LT in 1984 that responsibility for the problems it experienced with its Daimler Fleetlines could not all be laid at British Leyland’s door.

There are almost 150 photographs illustrating the unexpected variety of the London bus fleet over five decades. Separate sections list demonstrators which ran in London colours and show the allocation of LT’s registration blocks between 1939 and 1964.

While standardisation was one of LT’s laudable aims, as evidenced by such well-known types as the RF, RT, MB and DMS, over the postwar years to 1994 there was an incredible variety of types operated, from Leyland Titan PD1s to Dennis Lance SLFs, not forgetting the small buses of the late 1980s and early 1990s – Mercedes Benz, Metroriders from MCW and Optare, and a multiplicity of Dennis Darts.

Alongside its substantial bus fleet, LT and London Buses operated purpose-built coaches from the RFW-class AEC Regal IVs of 1952 to luxurious Leyland Tigers and DAFs in the 1990s. 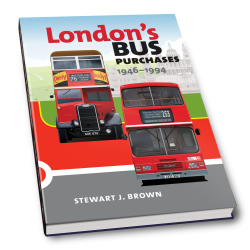 London’s bus purchases 1946-1994 is produced by the same team to the same high quality standards as Fawndoon’s previous books, but in a slightly more compact format. If you’re interested in London’s postwar bus (and trolleybus) buying this is an invaluable reference book.

Advancing in a Forward Direction 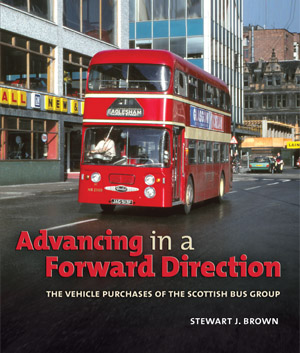 Everything you wanted to know about the Scottish Bus Group’s vehicles in one volume. Advancing in a Forward Direction is the enigmatic title of Fawndoon’s second Scottish-themed bus book, and in 192 pages with 300 photographs and comprehensive tables it gives details and background information on every type of bus and coach bought by the Group from 1946 until privatisation.

But Advancing in a Forward Direction is much more than dry lists of buses. In the main section of the book, dealing with new purchases, author Stewart J Brown provides an authoritative and sometimes critical overview of each model purchased, setting the Group’s vehicle purchases in a historical context. He looks at SBG’s conservative engineering policies and the Group’s unfortunate relationship with early rear-engined double-deckers.

Stewart Brown quotes from contemporary documentation, finding press criticism of vehicles such as the rear-engined Albion Viking (for its gear-changing) and the impressive M-type Motorway coach, described by one journalist at the time as “a rather ghastly mistake”.

Two further sections are devoted to vehicles acquired from the operators the Group took over, and vehicles bought second-hand, around half of which came from London Transport. 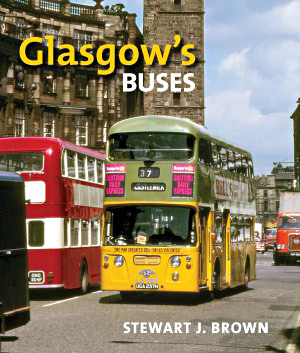 The story of the buses (and trolleybuses) of Glasgow Corporation and of the PTE which succeeded it is a fascinating one, and Glasgow’s Buses traces it from the first solid-tyred vehicles in 1924 through to the privatisation of the city’s bus operator, the PTE-owned Strathclyde Buses, in 1993.

The story is told in 90,000 words and 275 illustrations, drawings and maps. It draws on documents held in the archives of the Glasgow Vintage Vehicle Trust and the Glasgow City Archives, bringing to light information not previously published. This ranges from complaints about wartime Guys with five-cylinder engines to an argument by transport department general manager Eric Fitzpayne in 1950 that the adoption of 40ft-long single-deckers would ease the plight of hysterical conductresses.

The importance of the Atlantean from the 1960s onwards is covered, along with the move to one-man operation. The changes wrought in the 1980s are explored, when the scrapping of the PTE’s monopoly of local bus services and then deregulation brought about major changes to the route network, including expansion far beyond the city boundary. These changes affected the bus fleet, which shrunk from a peak of 1,600 vehicles in 1963 to less than half that number 30 years later. 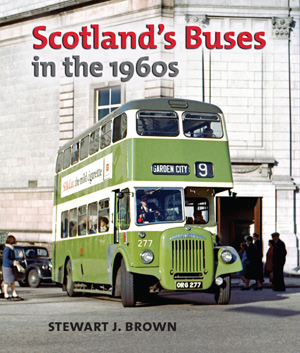 Scotland’s buses in the 1960s were represented by a striking and colourful range of operators, liveries and technologies. Some vehicles still on the road dated right back to pre-war years, while others heralded the new era of low-floor single-deckers and rear-engined double-deckers.

In this attractive new book, Stewart J Brown evokes the flavour of that period through a remarkable selection of colour photographs covering the length and breadth of the country, most of them previously unpublished. Region by region, his engrossing commentary puts bus operations in their context, while his entertaining, detailed and sometimes witty captions convey a remarkable amount of information about individual vehicles and their historical significance.

Bringing the period vibrantly to life

The vast majority of pictures were taken by the late Harry Hay, who spent a lifetime immersed in the industry, and wielded his relatively basic photographic equipment to astonishingly good effect.

This was the era when the new Alexander companies – Midland, Fife and Northern – were coming into their own; when David MacBrayne still held sway in the Highlands; when independents continued to play a major role in the industry; and when traditional municipal liveries were still to be seen in Scotland’s four biggest cities.

Scotland’s Buses in the 1960s brings all this vibrantly back to life.